Recreation of the pixel font from Nintendo's "The Legend of Zelda: Link's Awakening" (1993) on the Game Boy.

This recreation includes the special/accented characters from the french and german releases of the game. In game, the characters with a diaeresis use an additional tile above them - in this recreation, the characters have been combined properly (and as a result, the height of the font overall is greater than 8px). 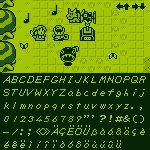 "Wow! This looks pretty heavy! You won't be able to Fontstruct it with just your bare hands..."

@zephram yeah, whenever i manage to find a very complete font in my research, i'm equal parts excited and terrified about the amount of work :)

It's a Link's Awakening quote. "Wow! This looks pretty heavy! You won't be able to pick it up with just your bare hands..." :D

Nice to see this font on here. A lot of YouTubers, Zelda streamers, etc. are fond of using the Link to the Past style fonts, but now they have an alternative.

oh crikey, i missed that reference completely even though i've been playing it recently (for the first time). then again, i now have the power bracelet anyway :)